I was mad and I let her know it.

It was snowy and icy outside and I was supposed to babysit for my sister and her husband to go over to our pastor’s house for an evening of fellowship.

Against my protests (“the roads are bad”, “the curves and hills on the way to their house will be dangerous”, etc.), my brother and sister proceeded and left me with their precious 5 year old.

After an evening of playing pirate games, reading books and snuggling, I put Eric to bed and made a cup of coffee and a nest on the couch to read.

Nineteen chapters and three hours later, my book was done and my sister and her husband still weren’t home.

This sounds ridiculous, but I was asking myself questions about what I would do if they were lying in a ditch somewhere. What would I do without my best friends? How would I raise Eric as a single aunt? How would I deal with any custody issues that may arise with my other nieces and nephews? How would I tell my parents? 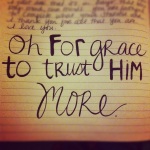 What’s worse is that it didn’t stop there.

My sister and Whitt make it home (obviously alive), but instead of being grateful they’re breathing I set out to let my sister know how mad I am at her for not declaring to me through the phone that she wasn’t in a ditch.

Turns out I was the one slipping and sliding on the ice last night. Not on the road but in my heart.

“Most women don’t have trouble avoiding (or at least recognizing the problem with) the conspicuously evil things, the outright no-nos. It’s those undercover, low-key matters, the ones that cloak themselves in the guise of entertainment–those are the ones that hook us. They’re unobtrusive. Quiet. Too comfortable and familiar, really, to be asked to leave. Just there. Justifiable.” -Priscilla Shirer, Resolution for Women, My Integrity

But here I am justifying not only the sin of worrying but of my anger toward my sister, who later told me (after she asked for forgiveness) she had no idea I was worried.

I even tried to justify that, “I love you and don’t want anything to happen to you…”

Well, duh. But if I really believe God is in control and knows the end from the beginning then I can trust Him like I say I do.

Oh how I long for what I proclaim with my lips in the light to be lived out in the dark.

“He has showed you, O man, what is good.
And what does the Lord require of you?
To act justly and to love mercy and to walk humbly with your God.” -Micah 6:8

“Do you fight for justice or just for yourself?”

“To “love mercy” means to have a hearty interest in doing things that bless and impact others’ lives. It means considering their needs above your own, not because they necessarily deserve it but simply because you “love” doing it for them. This is what God’s mercy looks like toward you and me. Doesn’t it? He has chosen not to give us what we deserve. He has withheld rightful judgment and punishment, choosing instead graciously to shower us with affection, tenderness, and forgiveness. Like Christ, we should be willing to do gracious things for others even when their actions and past choices don’t necessarily warrant it. Just because.”

“This is at the heart of the gospel we claim to believe. It is what “the Lord requires” of us. How, then, can we say that we want to be in God’s will if we conveniently ignore this very clear part of it?”

“If we really believe the gospel that Christ came to preach, then we will live like it–even if it means dealing with the discomforts His commands may cause.”

I tanked on this opportunity to be merciful, gracious and grateful. I’m unbelievably thankful for a heavenly Father who forgives and lovingly teaches us and for a sister and brother who do the same.

Dear Lord, give me holiness, integrity and a resolve to give no provision or place for sin, as tempting and seductive as compromise might be.