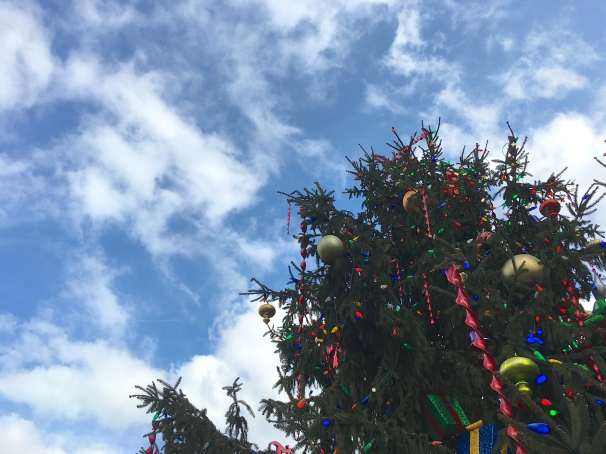 I love everything about Christmas.

The decorations. The people. The gifts. The “magic.” The joy. The bustle. The cold. The cheer. The hot beverages. The fireplaces. The trees. The parties. The music. All of it.

But over the last few days I’ve been pondering on the “wrapping” of Jesus and it makes me love Him even more. The reality of the incarnation—God becoming man—is staggering and makes my brain hurt if I think on it too much, but I wonder, as we slap the label “incarnation” on the birth of the long-awaited Messiah, if we actively remember everything that label entails?

We do a lot of wrapping this time of year (and rapping, if you live in my house), but have we thought lately of the ways Jesus was wrapped? Let’s consider a few.

The Son of God, the second person of the Trinity, who had ruled with God since before the world was spoken into orbit, laid aside His eternal brilliance and glory to be wrapped in flesh.

Flesh. Soaked in sin. Stained from the fall. Created by the One who now wore it stretched over tiny fragile bones.

After the Uncreated became created and wrapped Himself in flesh, His mother (whom He also created), wrapped Him in swaddling clothes and laid Him in a manger. Not the sparkly clean mangers with the perfect hay and sterile environment we see in nativity sets this time of year, but a filthy, gross, smelly food trough for filthy, gross, smelly animals.

Is this the proper bed for a King? Of course not. But it was just as intended. In fact, it was the sign.

Remember what the angel said to the shepherds: “This will be a sign to you. You will find the Babe, wrapped in swaddling clothes, lying in a manger.” What a strange site. Not that the shepherds were unfamiliar with a manger. It was part of their routine activities. But a child in a manger? What child is this that would be laid in a manger? The sign is not a chariot parked outside. It’s not a scepter, but a stable. -Allistair Begg

But that’s not the end of Jesus’ wrapping.

Wrapped in a Towel

The night of His betrayal we see this 30-something year old Jesus, who was fully God and fully man, take off His outer garment and wrap a towel around His waist.

Jesus wasn’t going to a spa. He wasn’t about to get pampered. He was about to die. And what did He do? What He always had done and what He continues to do: He took the form of a servant.

He washed the feet of His students. Including the one who was about to betray Him.

Let it sink in.

This God-Man, before arriving in sin-drenched humanity, had spoke the nations into being and governed the world alongside His Father. He was equal with God and worthy of the same worship. But He made Himself nothing (Philippians 2:7).

Of course, for those of us who think that man is the apex of it all, we can’t imagine anyone who wouldn’t be absolutely excited to be a man. But if you were God? Imagine. To be God and come down a birth canal, to be laid in a manger, to live as an outcast, to die as a stranger, to bear the abuse and the curse of the law—it sounds like “nothing” to me. -Allistair Begg

He made Himself nothing. In one sense of the word, He unwrapped Himself of one thing (glory) to wrap Himself in what was detestable to His holiness.

His whole life was one of wrapping.

Humility characterizes Jesus’ life on earth from start to finish.

Glory to the One who triumphs over fallen flesh, sin, death and hell. May He be rightly wrapped in praise this Christmas and forevermore.