I can’t wait to marry this man in 52 days. 💛💛💛 Also, we would like to thank all these publishing companies for sponsoring our relationship. (Okay, but seriously, if y’all want to sponsor us, hi, we’re ready.)
magical.
So, so, so excited to get into this book (and the gogurt). 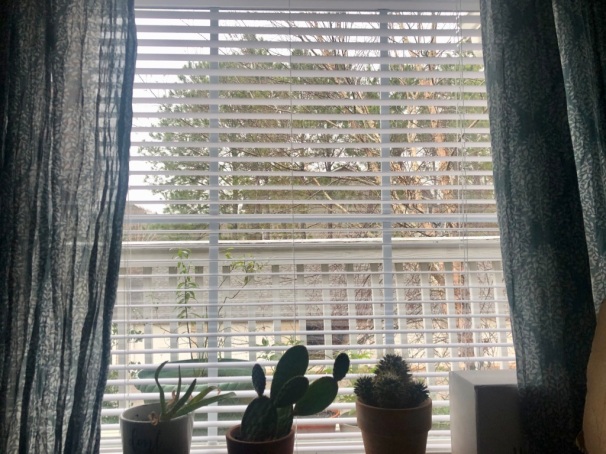 The bird woke me up.

In a rare turn of events, I’m off work in the middle of the week, and, though my mind was excited to sleep in, my body woke up according to its regularly scheduled programming at exactly 5:04 a.m. Not to be deterred from the plan of extended rest, I used the restroom and returned to bed to absent-mindedly scroll through social media and dream of sleeping until at least 7:30. I finally stopped thinking enough to fall back asleep.

But not for long.

My eyes jerked open. What is that? I’ve never heard such persistent, uh,-–how do you even describe the noise coming from this bird?—tweeting? Singing? Avian karaoke?

I laid in bed with my eyes closed, willing this sound machine to cease, to no avail. At this point, frustration is real and I started actively praying that the God of the universe would turn down the volume on this tiny feather ball outside my window.

I’m pretty sure He chuckled and cranked it up a notch.

As I laid there, an unwilling concert attendee, annoyance slipped into fascination. I mean, this little guy had to have been a highly caffeinated recent graduate at the bird equivalent to Juilliard. He had a song to sing and, by golly, he was singing it.

So what was his song?

(At this point, I really just want to fill this blog with more bird song puns, but I will refrain. Ha. I mean, come on, His Eye is on the Sparrow, anyone?? Too easy. Okay, I’m done.)

For real though, I laid there and was overcome by the reality that this bird was doing what it was made to do—sing to its Creator. He sang of new mercies and common grace and of a Designer that ordained our comings and goings, our rising and sleeping, our songs and silence.

He sang of beauty and majesty and gut-level joy in the middle of a storm.

It started raining. Hard. And as the bird continued singing, I started to see the sermon.

It’s been a painful few weeks.

It has been hard and heavy and extremely difficult to process. I don’t know how to navigate these new waters the Lord has brought us into but I know that He is undeniably with us and will never leave us to drown. The sorrow is real but so is the joy; part of what is so hard to comprehend. They coexist not as competitors but friends, each fulfilling their role of pointing us outside ourselves to the One whose hand gives both.

He wounds and He heals.
He cuts and He binds.
He gives and He takes.

And He is worthy of our complete devotion in the taking just as much as in the giving.

“The trials sent by God ever carry with them their own antidote. His furnaces always purify. His fires make the light of His presence visible. His storms and tempests make way for the ‘clear shining after the rain.’ ‘He maketh sore, and bindeth up; He woundeth, and His hands make whole.'” – Susannah Spurgeon

So the bird sang its melody of new mercies, made new for this day, this hour, this moment, and the rain came to remind us of the God who causes birds to sing and rain to fall. He is the One who causes the sun to shine and the earth to spin and dead hearts to come alive.

He has not only made us but, through His Son, made a way for our rebel hearts to be rescued by unfathomable grace. Our hearts ached for a song, a song we could hear only in jumbled whispers. We ached to be a part of a glorious melody bigger than our sin-soaked selves, something that would redeem this sorrow and last not only through life’s highs but also its lows and on into forever.

And the Lord has not only let us hear the music, but join in the song that will never end.

May we be found singing in the fire and in the sunshine. For, despite circumstances, our heavenly Maestro deserves every measure of our praise.

“The sweet story is more worth the telling than ever, because the Lord has been ‘a very present help in trouble;’ and though a diversity of afflictions has been encountered, His ‘I will be with thee’ has proved a sure refuge against the fierceness of the storm.” -Susannah Spurgeon